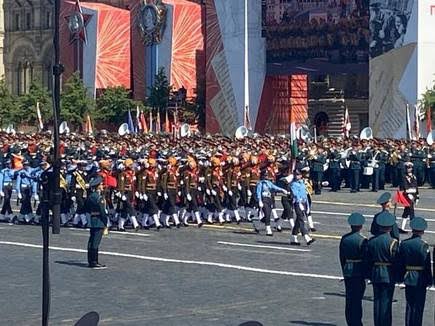 75-member Tri-service contingent of the Indian Armed Forces participated in the 75th anniversary of the Victory Day Parade at the iconic Red Square in Moscow on June 24. Defence Minister Rajnath Singh was one of the high profile guests at the event In Russia. 24 June 2020 Russia celebrated 75th anniversary of the victory of Soviet people in great patriotic second world war 1941-45.

“I am proud that a Tri-Service contingent of the Indian Armed Forces is also participating in this parade,”he tweeted.

” impressive turnout of the Tri-Service contingent of the Indian Armed Forces at the Victory Day Parade in Moscow is indeed an extremely proud and happy moment for me,”Mr. Singh said in another tweet.

The Tri-Service contingent of the Indian Armed Forces comprised 75 all ranks and marched along with contingents of Russian Armed Forces and 17 other countries, according to an official statement. The parade was reviewed by Russian President Vladimir Putin, war veterans, and guests, including Defence Minister Rajnath Singh.This year, 14,000 troops and several hundred military machines took part in the parade, including 30 historic T-34 tanks. President Putin congratulated the military and guests, saying this victory determined the future of the planet.

Russia postponed its military parade traditionally held on Moscow’s Red Square on May 9 for a later date due to the corona virus pandemic.On May 26, President Putin announced that the Victory Parade would be held on Moscow’s Red Square on June 2.He explained that this was chosen because, on June 24, 1945, the legendary historic parade of victors took place, when soldiers, who fought for Moscow and defended Leningrad, who stood their ground for Stalingrad, liberated Europe and stormed Berlin, marched on Red Square.