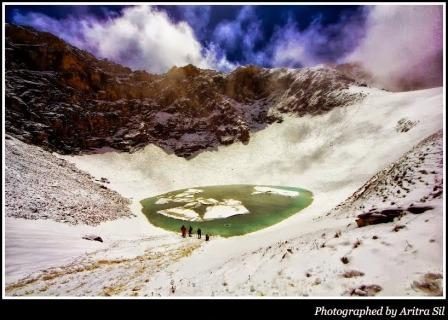 ROOPKUND locally known as skeleton Lake or Mysterious Lake , It’s lies in the Lap of Trishul  Massif , located in the Himalayas. It’s a high altitude glacial lake in the Uttarak hand  Roopkund is one of the important places for trekking in Chamoli District, Himalayas, near the base of two Himalayan peaks: Trisul (7,120 m) and Nanda Ghunti (6,310 m)  The Lake is flanked by a rock face named Junargali to the North and a peak named Chandania Kot to the East. Roopkund lake is covered with ice for most of the year Roopkund is known as a mystery lake and is surrounded by rock-strewn glaciers and snow-clad mountains. The lake is about two metres deep and invites hundreds of trekkers and pilgrims every year

IN 1942 A BRITISH FOREST guard in Roopkund, India made an alarming discovery. Some 16,000 feet above sea level, at the bottom of a small valley, was a frozen lake absolutely full of skeletons. That summer, the ice melting revealed even more skeletal remains, floating in the water and lying haphazardly around the lake’s edges.

Something horrible had happened here. The immediate assumption (it being war time) was that these were the remains of Japanese soldiers who had died of exposure while sneaking through India. The British government, terrified of a Japanese land invasion, sent a team of investigators to determine if this was true. However upon examination they realized these bones were not from Japanese soldiers—they weren’t fresh enough. As it turns out, all the bodies date to around 850 AD. DNA evidence indicates that there were two distinct groups of people, one a family or tribe of closely related individuals, and a second smaller, shorter group of locals, likely hired as porters and guides. Rings, spears, leather shoes, and bamboo staves were found, leading experts to believe that the group was comprised of pilgrims heading through the valley with the help of the locals.The researchers concluded that the death was due to a fatal blow on the back of their heads and not due to any wound by weapons, avalanche or landslide. The marks on their skulls and shoulders indicated at being hit by something round, like a cricket ball. The absence of injuries to other body parts indicated that hard round objects, possibly cricket ball sized hail stones or ice balls, fell from above. 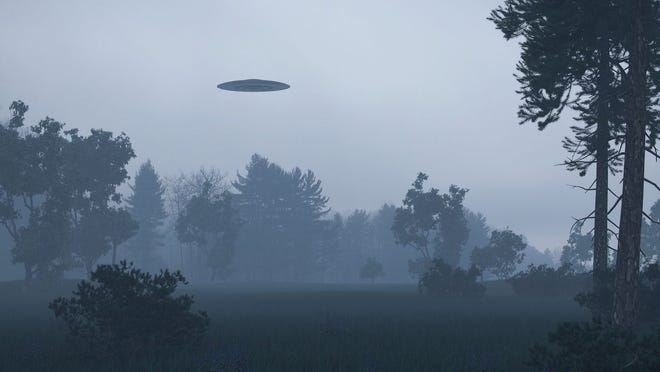 I Know I am late a moment ago I came to know about that 2nd July was UFO day, I am really very flatter to know about this day in my school days I was very much curious about the galaxy , the unknown mysterious world, other planets , aliens then with the time  I am distracted from my this world, but always when I get time I tried to gather information .so 1st I am telling you the reason behind the day

World UFO Day is an awareness day for people to gather together and watch the skies for unidentified flying objects. The day is celebrated by some on June 24, and others on July 2. June 24 is the date that aviator Kenneth Arnold reported what is generally considered to be the first widely reported unidentified flying object sighting in the United States,[ while July 2 commemorates the supposed UFO crash in the 1947 Roswell UFO Incident.

What is other side of the sky? Once This question always going round in my mind, other planets, solar system , milky way, black eye galaxy this things are fascinated millions , years after year scientist research and now the craze to know the unknown world , creature from other planet is really noticeable. Series, documentaries, movies based on aliens, other world.  But you know In Chhattisgarh ancient rock painting depicting UFO exist suggesting Alien communication with humans since prehistoric times, Archaeologists JR Bhagat, who discover them , said they depict strange humanoids with no facial features and other painting of flying discs.

The finding suggest that humans in prehistoric times may have seen or imagined beings from other planets which still create curiosity among people and researchers.

Growing up you solve so many puzzles – picture puzzles, riddles, and word quizzes – so that your mind gets accustomed to questioning everything around you. This develops in you an inquisitive nature and you start to see mysteries in everyday things around you. You try to question the existence of some things and the non-existence of others. In this world full of mysteries, one such mystery is that of the Bermuda Triangle.

Also known as the Devil’s Triangle, the Bermuda Triangle is a section of the Atlantic Ocean, roughly bounded by Miami, Bermuda, and Puerto Rico. Mythical literature revels in the stories of ghost ships, of airplanes disappearing forever, and of instruments going haywire around the Bermuda Triangle. But these are just fanciful theories; there is no solid proof that these types of mysterious disappearances occur less in the other well-traveled sections of the ocean than they do in the Bermuda Triangle. As a matter of fact, there are many people who navigate the Bermuda Triangle on a daily basis without any incident. So why do we still think of Bermuda Triangle as an unsolved mystery?

Covering about 500,000 square miles of the ocean, the area was sailed through by Christopher Columbus on his first voyage. He reported that a great flame of fire crashed into the sea which was probably a meteor. Also, his observations about the erratic compass readings could be explained by the fact that at that time a sliver of the Bermuda Triangle was one of the few places on earth where the true north and the magnetic north aligned together.

Reports of unexplained disappearances started capturing people’s interest around the early twentieth century when the USS Cyclops, a 542-meter long navy ship with 300 men and thousands of ton of manganese onboard, sank somewhere between Barbados and the Chesapeake Bay in 1918. Although they were equipped to do so, the Cyclops never sent an SOS distress call and the extensive search yielded no wreckage.

After that, an alleged pattern started to form when five navy bombers carrying 14 got severely lost in the area in 1945. The nave bombers were forced to ditch at sea when they ran low on fuel. A rescue plane with 13 men also disappeared while searching for them. Even a weeks-long investigation failed to turn up any evidence. 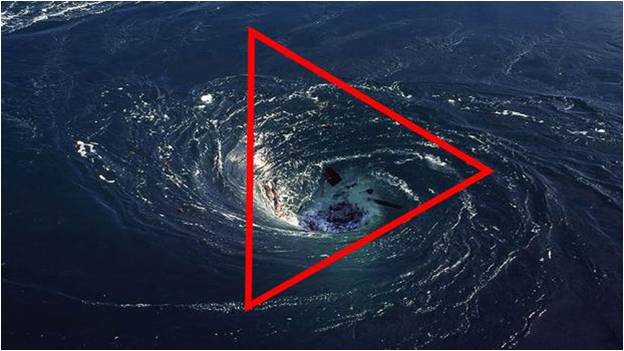 In a 1946 magazine article, author Vincent Gaddis coined the phrase “Bermuda Triangle” for the first time after which it became a sensational legend with reports of planes going down despite having just sent “all’s well” messages. Paranormal writers blamed the triangle’s lethality on everything from aliens and Atlantis to time warps and reverse gravity fields while scientific theories, on the other hand, pointed to magnetic anomalies, waterspouts, and methane gas eruptions from the ocean floor.

In all probability, however, many don’t recognize the Bermuda Triangle as a hazardous place. There is no single theory that solves the mystery but there has been nothing discovered indicating the casualties were a result of anything other than physical harm. No extraordinary factors have ever been identified.