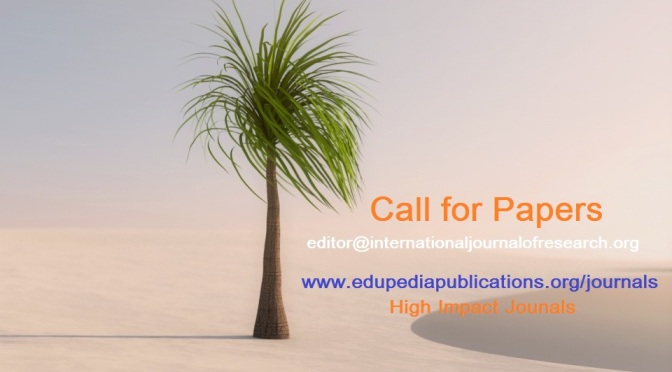 Literary texts are significantly made up of signifiers from the definition of poststructuralist perspective. The author’s literary product is a dynamic, when a reader is making multiple readings. That is to say that a primary reading is not an end. There are multiple readings are in literature. This kind of multiplicity of reading is safely called ‘misreading’

The well-known African American poet is Maya Angelou. She is a civil activist in Arkansas.  Arkansas is a place in America, where black people live and were discriminated brutally on the racial issues. She is labelled as postcolonial / subaltern writer. Her most famous poem is ‘My Arkansas’. Generally this poem deals with the poet’s reminiscent of her experience of the poet. As it is well known that this poem is a note of autobiographical. Angelou has brought bitterly out the present and the past experience. From the perspective of post structuralism, a theorist can reread this poem in the aspect of multiplicity of meaning. The surface level of the meaning is defaced and the hidden meaning is unearthed. The constant unearthing activity is the primary act of post structuralism.

Post structuralism has not emerged suddenly. In arts and humanities the theory has been developed from structuralism. Post structuralism has produced a term called ‘deconstruction’. Originally the term deconstruction announced and practised by Jacques Derrida.  Derrida was a French philosopher, born in 1930. In his intellectual account, he has written three significant books. Those are: a) Speech and Phenomena b) Writing and Difference and c) Of Grammatology. Derrida is not to the diametrically opposite meaning in a text. Rather, he is to the unread meaning, which is left in a text by a common reader. The term deconstruction is not a new one. It already existed in the 18th century. Derrida says that a literary text is already dismantled by itself. Therefore, he says that the left over meaning with the play of signifiers is reread.

‘The first known written appearance of the word in English is in 1882’. As with its French predecessor, it has legal connotations: ’a reform the beginnings of which must be a work of deconstruction’ (wolfreys, 117.)

The intended meaning defines that the surface level of the meaning in a text which the author wants to convey to readers. And it has a sequential logic at giving the meaning.

The unintended meaning defines that a reader deconstructs a literary text / art not from a reader’s own perspective, but to discover the unread he meaning, which is already dismantled by itself. In a linguistic network the play of signifiers are already tended to be deconstructed.

Deconstructive Analysis of the poem ‘My Arkansas’

Maya Angelou’s ‘My Arkansas’ is a well-known African American poem. Some readers and critics say that the poem deals with the theme of autobiography. Through this poem Angelou has depicted that there is a racial discrimination in her country. This poem is an example for that. In a deconstructive reading all the readings are the provisional. Therefore, in the practice of deconstruction, the term aporiais used.

There is a deep brooding

the poet has utilized the metaphorical and figurative language in the above stanza. The poet says that in Arkansas old crimes are prevalent even now. The words ‘old’ ’crimes ‘make sense that the poet is in dilemma between old crimes and the modern crimes, since the old crimes are emphasized figuratively.

Moreover, the author has used the figurative words comparatively that ‘deep’ ‘brooding’‘moss pend’ and ‘poplar trees’, which have the nature of fast growing. Here the figurative words are representing the crimes committed by people in the Arkansas are culture. The words ‘moss’ and ‘poplar’ are representing ‘nature’. The poet seeks for assistance to bring out culture from ‘nature’. This is what a poststructuralist reading calls a concept of binary opposition. That is nature X culture, man X woman as such. In the poem the signifiers reiterate nature for emphasizing culture. The poet explains that nature of fast growing trees like ‘moss’ and ‘poplar’. The above few lines of the poem have the nature of culture

The above lines are the environmental concern rather than her autobiographical note. The words ‘sullen earth’ and ‘too red’ are in the metaphorical sense. Again the poet seeks for assistance from nature ‘earth’. The words ‘too red’ might have explained that the earth is destroyed by the crimes.  It shows that the earth is being deteriorated into loss of fertility, nature and greenish, because of the man-made violence. It is better termed as anthropocentrism. Therefore, it might to say that the poet has eco-concern

And in that second

The above lines are the explanatory of change of whether /climatic condition. The sun is not able to appear and disappear in the proper region /location. The sun loses its brighter light to flash. The line ‘the past is brighter yet’ shows that the line is connected with the ‘old crimes’ like ‘moss pend’. The explanatory note here is the cultural degradation makes more on nature and it has lost ‘values’ and ‘nature’. Again the poet seeks for assistance from natural phenomena like ‘earth, moon’. The poet is so concern about the environmental degradation and is compared with past/old crimes in Arkansas.

Today is yet to come 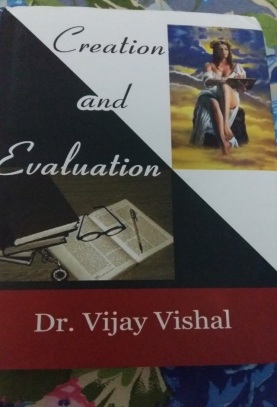 This book celebrates Dr. Vijay Vishal’s creativity and objectivity. The book has two parts and 4 sections: Each part has two sections. Part one is collection of Poems whereas part two is reviews and published research articles on poet’s collection.

I came across this book “creation and Evaluation” during one of my academic pursuits and get very attracted by its contents and presentation. The poet Dr. Vijay Vishal is really a man of letters who has dedicated his life in reading, writing and creativity. His best thing is that he not only creates but presents his own poetry’s critical analysis with same spontaneity. “Poetry is the spontaneous over flow of powerful feelings”,  I think this live is the base of every literature lover. We all love and praise poetry since time immortal. So, this book naturally draws my attention, when I came across it. The book has two parts, each part is divided in two sections Part I, section I is collection of 46 poems composed by Dr. Vishal, titled “Speechless Messenger”. All the poems have different title, some of them are about the beauty of Nature, birds and some are about realities of life and contemporary issues. Some poems express platonic love of the lovers. The poems are of rich quality written in an ornate style. He conveyed his feelings on different aspects of life. He writes in direct and clear notion, mysticism is totally absent. In Part I section II we have collection of 37 poems under the title “Parting Wish”. These poems are about the change in life, from Ancient to Modern times, from Girl to married women, and other changes that occur in life of a human being. It can be a male or a female. Dr. Vishal is a poet of keeping past traditions alive. He has kept art of English Romanticism alive in his poetry. He expresses human feelings, sufferings, problems and changes in his poetry. To him, life is not a free flow of water but it has hurdles which we have to pass. This is what his poetry gives us in the form of message.

Poetry is a natural overflow of feelings which is loved and liked by all. Dr. Vijay Vishal is this collection of poems has shown his best to attract his reader. His both collection of poems deal with a variety of topics and cover wide range of feelings, emotions and realities of life. In Part I section I “Speechless Messages” the poet, Dr. Vishal has given space to feelings and emotions related to Nature. Role of nature in context to human life has been beautifully presented in the form of poetry. His name as a poet is known to us, but this collection is his debut collection. By this bundle of poems, he want to convey a message of hope, aspiration and optimism as he sees expectations in the objects of Nature. His belief in the social norms and family are also positive if we analyse his poetry. The unborn foetus also shows rays of hope. The collection has 46 poems and the wide variety of subjects shows poets command over feelings, thought and Goddess Muse seems to be giving him divine blessings.

Part I Section II parting wish contains 37 poems which were actually written to keep poet Dr. Vijay Vishal’s bereaved wife’s soul and memory alive forever. She left poet alone in a very young age which perturbed him very much. The poet has mentioned reality and facts of life in the poems of this collection. The book shows reflection of Swimsburne in all the poems. The poems are really good and suggestive in readings. They can be categorised as autobiographical poems as they are the outburst of his own loss at a very age of life. Due to that he has lost interest in world and life. He wished to God to grant him courage to bear all this. The deep sorrow, suffering and pain which he expressed seem to be really pathetic. He is so original and his use of language is so commendable that we feel like as reading them again and again.

Part II has three sections which really have par excellence book reviews and research papers. The poet is lucky enough that nearly all stalwarts of contemporary era have given reviews on his books. They are really a gem of collection. The reviews again show that Dr. Vishal has really worked hard, original and poured feeling of his heart through pen. The area of subject he covered is wide in ‘Speechless Messanger’ but the collective give an optimistic note. In second collection ‘Parting wish’ the poet is Superb, original and an ardent lover who lost his beloved untimely, unrealistically. He is preparing himself mentally to bear the loss and to continue life even without her, keeping her alive forever in his memories. One aspect of his poetry which is left untouched was covered in the Part II, section three, where we have a published research paper titled “Anguish in the poems of Dr. Vishal.” The paper shows that Dr. Vishal  saw poetry as a notion to unleash social outrage. To him, it can awaken the dormant psyche of all people. He wants to uplift Indian tradition of poetry writing to a far end. All the critics who wrote on Dr. Vishal’s poetry, have one same opinion that he is a budding promising poet. who carved an eminent position in present day Indian English poetry. His poetry is a search of best verses of the present times and we can hope high with him and his pen. We can really hope that his bouquet of poems will enliven Indian English poetry.

In contrast to Jason’s neurosis and Quentin’s psychosis is Dilsey’s sense of temporal order and the grounding that she derives from her religion. In the Quentin section we had seen that time was the mausoleum of all hope and desire and the brothers are all caught up in a past in which Caddy had not lost her innocence and virginity and betrayed the family name. Dilsey in contrast thinks not in terms of the past but a redemptive future in which Christ will come and redeem believers all from their fragmented existences and bring them back to his abode in Paradise- a future she looks forward to in contrast to all the ruin and fragments and bondage to the past that Jason and Quentin experience.