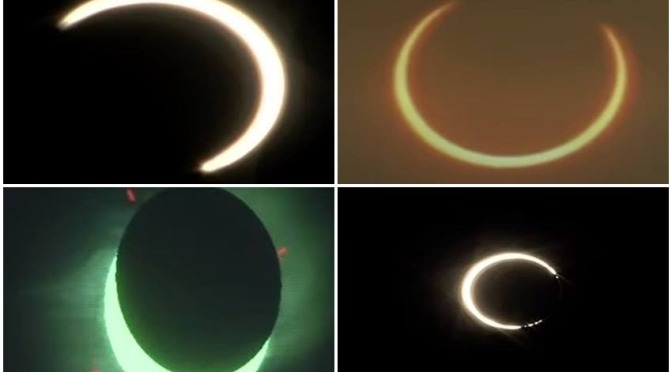 According to Nehru Planetarium Bhuj was the first city in India where the beginning of eclipse was visible at 9:58 am. The eclipse end at 4 hours later at 2:29 pm. This eclipse was not good. Looking directly to sun could cause harm to eyes so use of special goggles, welder’s shield, or pin-hole imaging technique were recommended to see the solar eclipse. It also can caused permanent damage to retina.

It was the second solar eclipse of 2020. It was seen at many places in India. It was seen mainly in Dehradun, Sirsa and Rajasthan in the form of fire ring. The net eclipse will be on 14 December but it will not be seen in India. It was also seen in Nepal, Pakistan, Saudi Arabia, UAE, Ethiopia and Congo. Its most effect was seen in New Delhi, Chandigarh, Mumbai, Kolkata, Hyderabad, Lucknow, Banglore Chennai, Shimla, etc.

According to religious beliefs, first of all take a bath after the eclipse ends. Although there is a belief of bathing in the holy rivers, but in view of the corona infection, it would be better to take bath by mixing Ganga water in the bath water at home. It is believed that to avoid the ill effects of the eclipse, donations should be made after the eclipse ends. After cleaning the house, God should be worshiped by cleaning the place of worship. Immediately after the eclipse is over, the entire house should be cleaned thoroughly. Because it is believed that negative energy comes into the house during solar eclipse. So after cleaning, must show sunlight or incense smoke in the whole house.