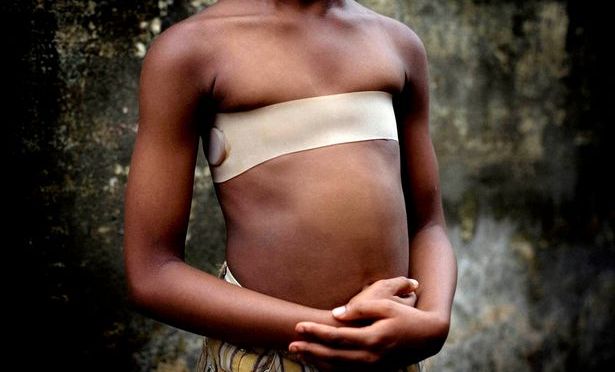 Breast ironing which is also known as the “breast flattening”, refers to the massaging and pounding of the girl’s breasts of the pubescent period, using the heated or the hard object, it is tried to either stop them from developing or to get disappear. It is carried out by the “misguided intention” of the close female of the victim, traditionally done by a grandmother, mother, aunt, or any female guardian. According to the United Nation, it is performed to protect the girl from the rape and sexual harassment and to prevent the early pregnancy which could corrode the family name and reputation. This allows females to pursue education instead of forcing them for early marriage.

Where Does It Happen

Breast ironing is common in West and Central Africa, including Guinea-Bissau, Chad, Togo, Benin, Guinea-Conakry, Côte d’Ivoire, Kenya and Zimbabwe and it’s particularly prevalent in Cameroon: there, the number of girls who have been subjected to breast, ironing is estimated to be as high as one in three (around 1.3 million)[1].

According to the United Nation’s worldwide data, 3.8 million teenagers have been affected by breast flattening. At least 1000 girls from the west African community of the UNITED KINGDOM have been subjected.

The use of hard objects and their force and lack of aftercare may develop some serious health conditions like:

Breast ironing has been an embedded part of the socialization of young girls from affected communities for quite some time.
The growth of a girl’s breasts during puberty is seen as linked to the emergence of her sexuality; if left unchecked, this will bring “problematic” and “destructive” implications for family and community status quo (patriarchy)

However, if we go by the research it suggests that the African mothers perform this to prevent the early marriages of their daughters and keep them longer for schooling. The mentality of the females shows the view that if the breasts were held back from the development then it cannot be viewed for the rapes and sexual harassment. However, their medical consequence is ignored.

There is no specific law regarding breast flattening within the UK and no one has even ever prosecuted for regulating such practice. Breast ironing is totally “illegal and child abuse”. The child is at risk of suffering physical and mental damage. This is a complex issue which is needed to be solved.

A Global Problem
A statement by the breast flattening survivor – “My mother took a pestle, she warmed it well in the fire and then she used it to pound my breasts while I was lying down then she took the back of a coconut, warmed it in the fire and used it to iron the breasts. I was crying and trembling to escape but there was no way.[3]”

Just a wonder such practice still get regulated somewhere in this world, where everyone is so educated and live such a modern lifestyle.

The breast ironing is situated with the ideology which looks the sexuality as shameful, which is denied and hidden. In the UK there runs a social movement called “The Girls Generation” for changing the social norms and social mindset. Still, this is a global problem. The focus needs to be put on the underlying inequalities which devalue the female body. Prohibition of such practices may hopefully bring new life and values to females.

Conclusion
It is a harmful cultural practice around the world that doesn’t get sufficient attention. Directly it’s a child abusive practice that ultimately reflects the female submissiveness and the complete control over female sexuality. There are still a million people in this world who don’t have a little thought about such harmful regulation. Such practice needs to get the awareness of the people and the government needs to take some action for its prohibition.

The female puberty is needed to be cherished but not to be held in the vulnerable hands. Ironing the breast is not the solution to prevent sexual harassment and rape against them.

Thousands of girls have been subjected to such practice which just causes cruelty towards them and this needed to get the stop. A female body is not a shame. The Female body is so beautiful in whichever manner it is formed by the almighty. No one should be given much power which could diminish its shine and beauty. Everybody is beautiful and needed to be protected.